How to get somewhere safe to park your bike at home

In 2011, members of Southwark Green Party asked shoppers on Lordship Lane and residents on the East Dulwich Estate, ‘What would improve your bike life?’ Many people replied, ‘Somewhere safe to keep a bike at home’. There were stories of bikes stolen, of landlords who refused to allow bikes inside, of crowded front halls in family homes and flats.

Eleanor wrote about the issue for the Guardian’s Bike Blog: Where to park your bike

She then worked with Southwark Cyclists produce a CGS helpsheet Sept 2014, focusing on making applications to Southwark Council’s ‘Cleaner Greener Safer’ fund. This is one way to get funding for cycle lockers and hangars.

Together with residents on the East Dulwich Estate, she applied for funding for 20 bike lockers – they were successful! The lockers are over-subscribed, with a waiting list of people who would like to cycle but have nowhere to keep a bike. 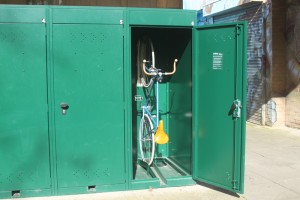 You can apply to get on the waiting list for a locker or a hangar by emailing transport@southwark.gov.uk

but it’s not a quick process. This Bromar Road resident has kick-started the process with a poster: 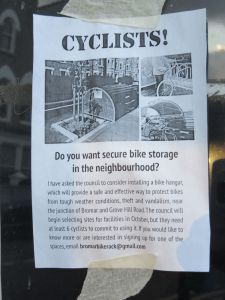 We wish the Bromar Road cyclists luck in their application!