Countryside in our city

‘It’s not under lock and key… a place like this is really important. We need a countryside in our city.’ (SE22 resident who visits Green Dale a couple of times a week to play football on the astroturf.)

‘It isn’t a regimented park… it is scruffy and governed by natural cycles. All the wildlife that is here. Incredible to have this space.’ (SE15 residents, daily visitors to Green Dale to walk the dog.)

I was very moved to read these comments made by local residents about Green Dale Fields, the open space that runs between Sainsbury’s/Champion Hill stadium and the Green Dale cycle/footpath. Volunteers from the Friends of Green Dale carried out an all-day survey of 50 people who used or walked through Green Dale on Sunday 18 June.

A third of people surveyed use Green Dale to walk their dogs, while others use it for football on the astroturf, cycling, tennis and exercising. Anyone can turn up and play on the astroturf pitches – there’s no fee or booking system.

People walking through said they were on their way to places including Dulwich Picture Gallery. As a child, the poet Robert Browning used to walk to the gallery from his home on the corner of Coleman Road and Southampton Way. (A plaque above the dry-cleaner’s at 179 Southampton Way marks the spot.) He described it as ‘a green half-hour’s walk over the fields’, and on Green Dale you can imagine what that would have been like in the 1820s.

Other reasons for being there that Sunday included sunbathing, birdwatching, enjoying the peace and quiet – and collecting long grass for a guinea pig!

Chris Rowse, Chair of Friends of Green Dale, noted that people appreciate Green Dale’s unspoilt character and most said they preferred it to a more ‘manicured’ park: ‘People enjoy the wide open space and wild greenery’.

I love classic Victorian parks like Brunswick Park, Myatt’s Fields and Ruskin Park. They have an incredible density of different things happening at the same time – tennis, the splash pool, picnics and football. But it is also vitally important to have access to wilder spaces. On Green Dale, you can pick blackberries from the bramble hedges; older children can discover the simple pleasures of hanging out in nature; and birds, bats, frogs, and hedgehogs thrive, a short but significant distance away from streetlights and the noise of cars.

‘It feels wild and beautiful.’

‘Tranquillity in the city.’

If you want evidence of the benefits for mental and physical health of green spaces in cities, there’s lots collected here by the National Institute for Health and Care Excellence. But the comments collected in the Green Dale Survey Report are rich and personal  and I’m very grateful that the Friends spent a day talking to people about how they feel about Green Dale. 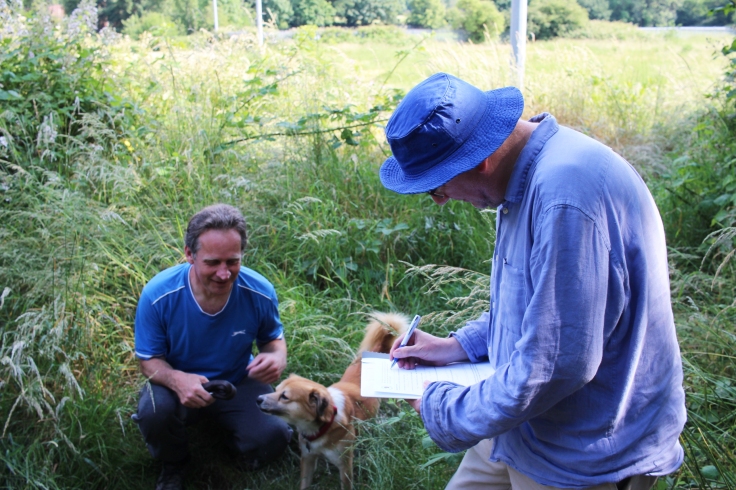 A young Viking wearing a horned helmet answered the door to us in South Camberwell today. She is a fan of Cressida Cowell’s series of dragon books, beginning with How to Train Your Dragon. I’ve just been introduced to these books by my nephew and it turned out that we’d all been to a fab talk Cressida Cowell gave last week, put on by a local independent bookshop, Village Books.

The Viking’s dad pointed out the rich theme of environmental thinking that develops through the series: the dragons are creatures that are (somewhat) tamed by the Vikings, living alongside humans, but in our time they have disappeared from the world – why?

In the first book, an impossibly large dragon explains the food chain that links all human and animal life:

The thing is, we are all, in a sense, supper. Walking, talking, breathing suppers, that’s what we are. Take you, for instance. YOU are about to be eaten by ME, so that makes you supper. That’s obvious. But even a murderous carnivore like myself will be a supper for worms one day. We’re all snatching precious moments from the peaceful jaws of time,’ said the Dragon cheerfully.

Anyway, our conversation with the Viking and her dad got us thinking about all kinds of things including local currencies like the Brixton Brick, urban wind turbines, and environmental themes in children’s books. Here is the beginning of a list, off the top of my head:

I also enjoyed these two (rather bleak) visions of the future (for teenagers):

There’s a nice article by Alice Bell about children’s literature and environment in the book Culture and Climate Change: Narratives which can be downloaded from here.

Bell discusses superhero books like Jonathon Porrit’s Captain Eco and the Fate of the Earth (1991) and the more tongue-in-cheek Your Planet Needs You! A Kid’s Guide to Going Green by Dave Reay (2009) in which a group of kids and their teacher have to explain global warming to the so-called superhero.

Which green books would you recommend to young readers?