Countryside in our city

‘It’s not under lock and key… a place like this is really important. We need a countryside in our city.’ (SE22 resident who visits Green Dale a couple of times a week to play football on the astroturf.)

‘It isn’t a regimented park… it is scruffy and governed by natural cycles. All the wildlife that is here. Incredible to have this space.’ (SE15 residents, daily visitors to Green Dale to walk the dog.)

I was very moved to read these comments made by local residents about Green Dale Fields, the open space that runs between Sainsbury’s/Champion Hill stadium and the Green Dale cycle/footpath. Volunteers from the Friends of Green Dale carried out an all-day survey of 50 people who used or walked through Green Dale on Sunday 18 June.

A third of people surveyed use Green Dale to walk their dogs, while others use it for football on the astroturf, cycling, tennis and exercising. Anyone can turn up and play on the astroturf pitches – there’s no fee or booking system.

People walking through said they were on their way to places including Dulwich Picture Gallery. As a child, the poet Robert Browning used to walk to the gallery from his home on the corner of Coleman Road and Southampton Way. (A plaque above the dry-cleaner’s at 179 Southampton Way marks the spot.) He described it as ‘a green half-hour’s walk over the fields’, and on Green Dale you can imagine what that would have been like in the 1820s.

Other reasons for being there that Sunday included sunbathing, birdwatching, enjoying the peace and quiet – and collecting long grass for a guinea pig!

Chris Rowse, Chair of Friends of Green Dale, noted that people appreciate Green Dale’s unspoilt character and most said they preferred it to a more ‘manicured’ park: ‘People enjoy the wide open space and wild greenery’.

I love classic Victorian parks like Brunswick Park, Myatt’s Fields and Ruskin Park. They have an incredible density of different things happening at the same time – tennis, the splash pool, picnics and football. But it is also vitally important to have access to wilder spaces. On Green Dale, you can pick blackberries from the bramble hedges; older children can discover the simple pleasures of hanging out in nature; and birds, bats, frogs, and hedgehogs thrive, a short but significant distance away from streetlights and the noise of cars.

‘It feels wild and beautiful.’

‘Tranquillity in the city.’

If you want evidence of the benefits for mental and physical health of green spaces in cities, there’s lots collected here by the National Institute for Health and Care Excellence. But the comments collected in the Green Dale Survey Report are rich and personal  and I’m very grateful that the Friends spent a day talking to people about how they feel about Green Dale.

The small stuff that matters

‘Don’t sweat the small stuff’ is generally good advice. But it’s at the small scale that high level policies are implemented, paving stone by paving stone. Things that seem like small decisions can have long-lasting effects on the way people feel and behave. So while national politics is in turmoil, a friend and I have been knocking on our neighbours’ doors to ask them about the shrubs and bricks they pass every day. 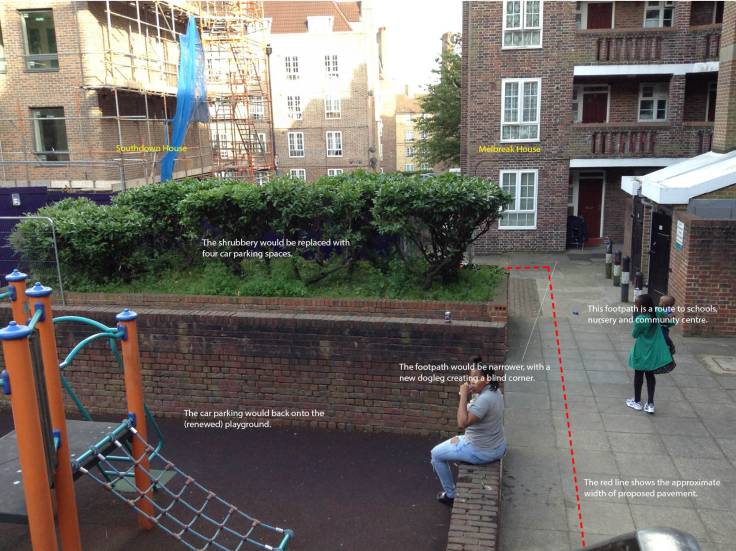 This photo shows a footpath running between Pytchley Road and Albrighton Road, on the East Dulwich Estate. It’s used by residents of the adjacent blocks, and also by parents and children heading to local primary schools, the East Dulwich Community Nursery and the Albrighton Community Centre. It’s a good way to avoid the noise and pollution of the main road, and offers the only step-free route up this part of the hill between Dog Kennel Hill and Bromar Road.

Southwark Council plans to demolish the large brick planter and replace it with four car parking spaces. Does this make any sense at a time when everyone wants to encourage walking instead of the use of private cars? What do Southwark Council’s policies say?

Strategic Policy 5 on Healthy, active lives of the Preferred Option of the New Southwark Plan states that ‘New policies for improving town centres, building schools, and providing the facilities for cycling and walking will address physical and mental health issues to improve the every day experiences of residents, workers and shoppers.’ Strategic Policy 6 Cleaner Greener Safer states that ‘Southwark will be a place where walking, cycling and public transport is the most convenient, safe and attractive way to move around. We will protect and improve our network of open spaces, trees and biodiverse habitats and green corridors that make places open and attractive.’

It’s good stuff. The council’s high level policies recognise the importance of greenery in tackling air pollution, unsustainable carbon consumption and public health problems. And yet in this small corner of the borough, council officers persist with a plan that flies in the face of those policies.

As residents, we’ve objected to this detail of the plan since it was first proposed in 2013. We’ve attended monthly Regeneration Project Team meetings, and made a deputation to the planning committee in 2013. As a result of our comments, the Planning department said that the plans must be revised to preserve step-free access through the courtyard (the original plans had replaced a sloping footpath with steps). But the revised plans still included new car parking spaces and footpaths that were a mere 1.2 metres wide at some points. This makes it hard for pedestrians to pass – if two people pushing buggies in opposite directions met, one would have to reverse back!

Image from a Scottish Government document on designing streets. The accompanying notes state: ‘In lightly used streets (such as those with a purely residential function), the minimum unobstructed width for pedestrians should generally be 2 m’.

Last month an amended plan was presented to us, increasing the footpath width to 1.8m. But it still narrows the footpath significantly and would force pedestrians to follow a tight ‘dogleg’ path round Melbreak House, creating a new blindspot. By reducing visibility and increasing the chance of conflict between pedestrians heading in opposite directions, it is likely to make walking here feel less pleasant and less safe at night.

The design also depends on demolishing a large brick planter containing shrubs. Air pollution is an acknowledged public health emergency in London. Trees and shrubs play a significant role in trapping particulates and taking them out of the air, as well as producing oxygen. We should be planting more, not cutting them down. Here, the proposed car parking spaces would back onto a children’s playground – an undesirable combination from the point of view both of physical safety and air pollution. Greenery also helps to absorb sound – an important consideration since blocks of flats can create hard ‘corridors’ that bounce and amplify street sounds. And replacing a large bed of shrubs with tarmac is contrary to all the current thinking on the need for sustainable urban drainage.

So what of the assumed demand for car parking? In this part of the borough in 2011, 36% of residents owned cars. Census figures show car ownership is falling across London. Our common space should not be designed only for the presumed needs of a minority: after all, every car owner also uses pavements and footpaths to get to their front door. Residents who own cars here would also be affected by the loss of space for pedestrians and the loss of greenery; they also have children who use the playground. Though there has been pressure on parking while Albrighton and Pytchley Roads have been closed off for building work, these nearby streets will offer plenty of spaces once they reopen.

Previously, there were no private car parking spaces at this entrance to the courtyard: a ‘deliveries/emergency access only’ entrance would ensure that delivery vans and emergency vehicles can park close to the residential blocks when needed.

So far, we’ve spoken to about half the residents in this courtyard. Everyone we’ve spoken to – including car owners – has signed our petition (below). We’re now waiting to see how the council officers responsible for New Homes and Regeneration will respond.

On balance, I think it’s worth sweating the small stuff here. After all, decisions about bricks and mortar, trees and public space are likely to last for a generation.

We, the undersigned, ask Southwark Council officers responsible for New Homes and Regeneration to change their current plans for Melbreak and Whaddon courtyard on the East Dulwich Estate. We urge them to follow the council’s own policies on walking, biodiversity and green spaces. These policies are meant to protect and improve the trees and shrubs around our homes and make sure that walking to school and shops is safe and convenient. We are asking for a new design that

a) keeps the flowerbed

b) keeps a wide pavement

c) keeps access for bin-trucks, deliveries and emergency vehicles only.

A young Viking wearing a horned helmet answered the door to us in South Camberwell today. She is a fan of Cressida Cowell’s series of dragon books, beginning with How to Train Your Dragon. I’ve just been introduced to these books by my nephew and it turned out that we’d all been to a fab talk Cressida Cowell gave last week, put on by a local independent bookshop, Village Books.

The Viking’s dad pointed out the rich theme of environmental thinking that develops through the series: the dragons are creatures that are (somewhat) tamed by the Vikings, living alongside humans, but in our time they have disappeared from the world – why?

In the first book, an impossibly large dragon explains the food chain that links all human and animal life:

The thing is, we are all, in a sense, supper. Walking, talking, breathing suppers, that’s what we are. Take you, for instance. YOU are about to be eaten by ME, so that makes you supper. That’s obvious. But even a murderous carnivore like myself will be a supper for worms one day. We’re all snatching precious moments from the peaceful jaws of time,’ said the Dragon cheerfully.

Anyway, our conversation with the Viking and her dad got us thinking about all kinds of things including local currencies like the Brixton Brick, urban wind turbines, and environmental themes in children’s books. Here is the beginning of a list, off the top of my head:

I also enjoyed these two (rather bleak) visions of the future (for teenagers):

There’s a nice article by Alice Bell about children’s literature and environment in the book Culture and Climate Change: Narratives which can be downloaded from here.

Bell discusses superhero books like Jonathon Porrit’s Captain Eco and the Fate of the Earth (1991) and the more tongue-in-cheek Your Planet Needs You! A Kid’s Guide to Going Green by Dave Reay (2009) in which a group of kids and their teacher have to explain global warming to the so-called superhero.

Which green books would you recommend to young readers?