We’ve been out and about talking to residents in Camberwell. These are some of the questions we’ve been asked on the doorstep.

1. Why doesn’t Southwark Council put up signs telling people that they could lose their council flat or be fined £1,000 if they don’t pick up after their dog?

Eleanor says: ‘This is a real problem and I don’t understand why some notoriously stinky spots don’t even display the most basic signs.

I’d like to sit out on the lawn near my flat on a sunny day, but some dog owners treat the grass as a toilet. It’s is not safe for children to play there because of the risk of infection and blindness from dog mess.

In some cases, contractors doing work for the council have refused to put up scaffolding until the council cleans up some of the grass areas next to flats! So dog fouling is costing us all money, as well as risking health problems.

On the East Dulwich Estate, we’ve repeatedly asked for signs to discourage fouling, or even stencilled icons on the paths, but it seems to be extraordinarily hard to get this done. Last year, children designed their own signs, and we laminated them and put them up at some of the worst spots.

Southwark Council has said that it’s not their policy to state the possible penalty. These examples from Kensington and Chelsea and Dublin send a strong message and include information about the penalties.’

2. What on earth are they spraying on Southwark streets? 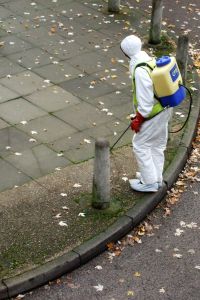 Questions about the long-term safety of this herbicide have become increasingly urgent. The World Health Organisation recently designated it as ‘probably carcinogenic to humans’.

In Southwark, we ought – at the very least – to be discussing alternative methods.